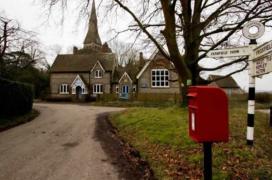 The village of Privett dates back to the 14th Century, part of the parish and manor of West Meon in 1391, belonging to St.Swithun’s Monastery. It was later granted to the Dean and Chapter of Winchester by King Henry VIII.

The nearby estate of Basing was owned by William Nicholson of J&W Nicholson & co gin distillery and in 1863 he brought the village of Privett and endowed it with a new church, vicarage school (which is our home for our night of ghost hunting) and several cottages for the workers, before this the village was made up medley of cottages and farms and their own small chapel dedicated to the holy trinity which over looked Meon Valley.

The medieval style church that Mr Nicholson had designed and built by Sir Arthur Blomfield a London architect, in 1876-1878. It has a spire which stands at 180ft making it the highest in Hampshire and contains 8 bells, the church stands directly next to the school.

Mr Nicholson and his wife Isabella had 14 children , Three of the stained windows in the church are in memory of 3 of their sons who died. In this church during the day wr visited to enjoy its beauty and history and we heard some very odd noises and voices!

Mr Nicholson also had a huge love for cricket, even lending money to Marylebone cricket club, enabling them to purchase Lords Cricket ground in 1864. Out of respect it is thought the team changed their uniforms from the blue to the deep red and Yolk yellow colours of Nicholson Gin, giving their uniforms the famous nickname of bacon and eggs.

By the end of the 19th century the Nicholson estate covered most of Privett and neighbouring Froxfield, when he died he passed the estate over to his son William Graham Nicholson who also served as M.P. for Petersfield. Mr Nicholson certainly made his mark in this village.

Our overnight ghost hunt is within the old school house, which is vast with lots of little rooms upstairs and down!

Before our investigation this summer, Privett school has never been investigated, we feel we have just scratched the surface! During our investigation we had many experiences, our electrical equipment affected, rem pod being affected on command, strange smells coming from nowhere and disappearing as quick!

We had taps and knocks on request, some messaged via the Ouija board and planchette, torches turned on and off and some guests reporting feeling quick sickly and having strange pains only in certain rooms!

A wonderful location, already giving us some things we can’t explain.... we are excited to see what it holds for us as the building awakes for us.