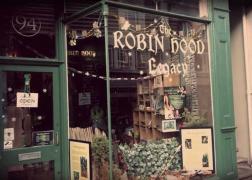 The building at 94 Friar street sits next to Nottingham castle and dates from the 1700s but the cave beneath is medieval, showing that there has been some kind of building on that site for many centuries earlier than the current building. It’s believed it was built as a house but has been used as various businesses in the 20th and 21st century.

It is now home to the Robin Hood legacy museum, which is an interactive museum

Dedicated to the legendary tales of Robin Hood.

There are five "human" spirits that regularly interact with investigators with an occasional sixth as well as a Poltergeist Who has a habit of turning on taps full force and messing with electrical devices. The audio-visual displays across the museum floors, get set off and battery-powered devices such as cameras and phones get drained very quickly- we can definitely confirm this as our REM pod has such intense interaction upon request, the battery was drained after one vigil in the cave.

The regularly encountered human spirits are a "busy" lady in the top room who is sometimes interpreted as a maid, a "worried" male entity who paces and mutters in Friar Tuck's room, an angry and somewhat aggressive male in the Sheriff's room who seems to hate women and often tries to scare & intimidate investigators but backs down quickly if confronted.

There are also two children, a boy and girl aged 8-10 who like to interact with ghost hunters and seem aware of the other spirits but do not seem to be not connected with them. There is also a small girl of 3 or 4 who turns up on occasion, inquisitive to what we are doing here!

The Herne costume in the Forest has, due to decades of respect and worship being focussed towards it by people who see it as an "idol" of the Horned God Cernunos, has taken on a power and "life" of its own within its area of the museum.

He is a strongly positive and protective force that watches over the whole building and everyone in it but needs to be treated with respect or can cause misfortune, much like the faeries of traditional folklore.

We where beyond impressed with our experiences here on our first investigation that we eagerly anticipate returning to this beautiful and historic city to investigate the paranormal claims of this unique building!