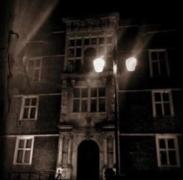 Charlton house has stood for over 400 years, built between 1607 -1612 for Sir Adam newton, who was a tutor to Henry, prince of Wales- The eldest son of James l. One of London’s surviving great Jacobean mansion set in charlton park, red brick with white stone dressings and classic Jacobean styles make it stand out for miles, a very majestic and grand looking building.... with sinister secrets.

Each of the long rooms have a unique fireplace coupled with beautiful strap work ceilings and original features. It is within one of these fireplaces the remains of a baby where found and a mystery was founded. Witnesses over many years, have claimed seeing a white figure of a woman carrying a baby, is this the mother of the child who’s remains where found? The grounds have undergone a number of changes over the last four centuries but remain evocative of times gone by.

Our guests have experienced some very intense moments in the basest area in particular, witnessing shadows and hearing voices on our spirit boxes! Table tipping has become a highlight here with immense activity on some occasions! The attic is not for the faint of heart, with many of our guests not lasting a full vigil... will you be brave enough to encounter the paranormal entities that roam the halls of Charlton house? Book on with our deposit option now!

Charlton house played a vital role during the First World War . As a divisional headquarters of the Red Cross for Greenwich and Woolwich. It later served as a wartime hospital,then a museum and library and is now a community centre. This beautiful mansion has seen its fair share of occupants over the centuries, there have been reports of poltergeist activity of objects being moved and a grey lady carrying a swaddled baby. The cause of the disturbance is thought to be sir William Langhorne one of the occupants who lived in charlton house from 1680 he died in 1715 an east India merchant still never having aired an heir. His desperation for a child of his own keeps his spirit forever on the prowl for a fertile bride and mother .